The Falmouth Mock Newbery Book Club began in the fall of 2010 at Plummer-Motz Elementary School. Louise Capizzo (Mrs. C.) was the children's librarian at Falmouth Memorial Library at the time, and she was also a member of the 2011 Newbery Medal committee. Mrs. C. had an idea to start a Mock Newbery book club for children in Falmouth to get them excited about the award.

Mrs. C. and I worked together to get the book club running. The first year we included readers in grades 3-6, and we met after school at Plummer-Motz. We had 70 students sign up for the book club, and we read from a list of 25 books.

In January of 2011, we held a school assembly and invited guests from the community to read passages from some of the books. Guest readers included our  school principal, school district superintendent, president of the Falmouth Little League, high school librarian, high school debate team members, school police officer, and a news anchor from Maine Public Radio 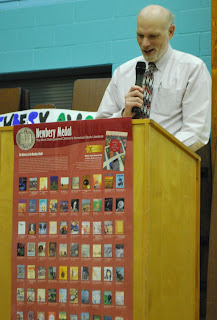 
The first book to win the Falmouth Mock Newbery Award was Out of My Mind by Sharon Draper. 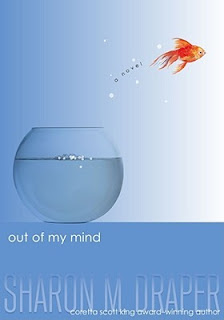 The 2011-2012 school year was full of changes. Mrs. C. took a new job at the Scarborough Public Library. Plummer-Motz School closed, and we moved into a new K-5 building. We continue to have a large and active Mock Newbery Book Club for 4th and 5th grade readers at Falmouth Elementary School thanks to Mrs. C.'s fantastic idea and partnership with the school.